One of the great things about Christmas break is (hopefully) having some downtime to just chill out and relax.  With all of the hustle and bustle, it’s nice to just park it on the couch and binge watch some good TV.  Here are some of my favorites that hooked me in and got me into binge-watching mode, that I think you’ll enjoy.  This post contains some affiliate links.

Fargo
My husband and I got hooked on Fargo before the holiday break, but it was an easy binge watching series (and a different take from the movie).  There are two seasons so far, with a third in the wings.  The one thing I must warn you about if you watch this show, is that you’ll start talking with a Minnesota/North Dakota accent, and you’ll start saying “Ya” a lot.  Well, we did, anyway.  It’s on the FX network, so you might also be able to catch the show On Demand, depending upon your cable subscription.

Homeland
If you start watching Homeland, you might as well block off your holiday break for it, because it is so good.  My husband had been watching it before I got on board (I’m a slow learner sometimes), but oh my goodness, it’s one that draws you in and doesn’t let go.  I have a tendency to get sucked in to CIA types of shows and movies, and this one doesn’t disappoint, taking twists and turns that you just never anticipate.  And just when you think they can’t come up with another season, they do. 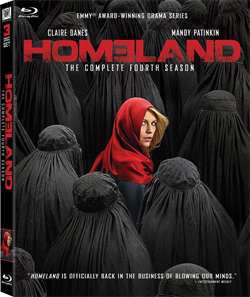 If you don’t have Showtime, they offer a 7-day free trial through Amazon (we watch a lot through Amazon video via our Roku, or you can use an Amazon Fire Stick), so you can get a head start on your binge watching before making a full commitment.

Veep
I’ve always been a fan of Julia Louis-Dreyfus, (another recent movie favorite of mine with her in it is Enough Said), but she brings her humor to politics in Veep.  It’s a funny series, filled with hysterical dialogue and a great cast.  And if you’re an Amazon Prime member, the first series is free!  If you’re not an Amazon Prime member, you can do a 30 day free trial.  Or, if you’re an HBO subscriber, you can watch it for free.  So, no excuse not to watch this gem.

House of Cards
When House of Cards first came out, they (brilliantly) released all thirteen episodes at the same time, making me an instant fan of binge-watching (and I think this was the first time I actually binge watched a series, quite honestly).  House of Cards is a political thriller, that probably isn’t too far off in terms of what political life is like in real life.  Kevin Spacey is brilliant, and Robin Wright is stunning, stylish and equally mesmerizing.  House of Cards is available for free if you are a Netflix subscriber.

Shameless
Shameless lives up to its namesake – it is raucous, hilarious and … shameless.  William H. Macy heads up the cast with brilliant performances and nine lives.  Per the Amazon description –

Meet Frank Gallagher (William H. Macy): proud, working-class patriarch to a motley brood of six smart, spirited and independent kids who, without him, would be…better off! In Frank’s booze-addled view, parenting just eats into his hard-earned bar-crawling and carousing time around Chicago – so he leaves it to eldest daughter Fiona (Emmy Rossum) to hold down the fort. Bearing the de facto parent badge/burden, she makes sure her younger siblings do their chores, keep a clean(ish) home and feed the Gallagher family fund jar because the gas bill is due, and everyone (no matter how small) works to keep the house lights on, as well as food on the table. Brothers Lip, Ian and Carl use their intellect to break every rule in the book to survive and make the bank, while younger sister Debbie would sooner steal her share. Liam, the youngest, is just happy to be along for the ride. The Gallaghers are irreverent, endearing, resilient – and they’re absolutely, wildly and unapologetically SHAMELESS.

If you already subscribe to Showtime, you can watch it for free.

The Affair
I just finished up the second season of The Affair, and loved it.  The first season is about “the affair” and the second season is more about what happens after the affair.  Two totally different stories, and what I enjoy most about this show is that much of the time, they tell the story from two points of view, and how it changes, based upon different perspectives.  From the clothes, to the set up of the scene, and the meaning behind the conversations – it’s quite compelling to see the stories told like this.  Available on Amazon, or for free on Showtime if you’re a subscriber.

Geez, I didn’t realize how much Showtime I watch!  What are some of your favorite shows ti binge watch?  I swear, I do read/listen to books, and don’t even have my TV turned on during the day.  These are just some of my favorites that I thought you might enjoy.

I’m Jenny, a wife of 23 years, mother of three, and a corporate drop-out. I’m a creative minded blogger, business owner and DIYer, and love transforming furniture, cabinets and rooms in my home. I’m a card carrying paint geek, and am always amazed at the power of paint in making budget-friendly updates to your home. I’m a serial house-stalker, and never tire of a great home tour or a before and after renovation. I’m a firm believer in restyling, refreshing and renewing things in your home to make it your own - without breaking the budget. I’ll show you how!

This site uses Akismet to reduce spam. Learn how your comment data is processed.

My name is Jenny, and I'm a corporate drop-out, mother of three, rookie photographer and marathon runner, married 22 years to a man with a big heart and an old soul.